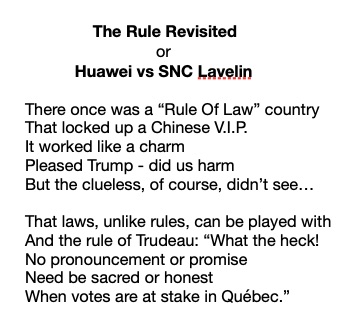 Recently Canadian Cabinet Minister, Jody Wilson-Reybold, tried to respect the Rule of Law as Attorney-General of Canada in deciding to let the courts continue to prosecute Québec Company SNC Lavelin for paying bribes to land lucrative  Libyan contracts between 2001 and 2011. Shortly after that the Minister was demoted from her tricky dual role of Minister of Justice and Attorney General of Canada to Minister of Veterans Affairs by PM Justin Trudeau.

Flashback to the recent, embarrassing and ongoing fiasco in an extradition case requested by our frenetic regime to the south:

Prime Minister Trudeau and Foreign Minister Chrystia Freeland repeated over and over and over that Canada is a Rule of Law country after arresting Huawei’s CFO, Meng Wanzhou on December 1, 2018 and holding her for extradition to the USA, where she may be prosecuted. President Trump made remarks that imply that the USA is using this threat of prosecution as a bargaining chip to get a better trade deal with China – all of this at the expense of Canada’s relationship with China and putting at serious risk three Canadians being prosecuted by the Chinese for various crimes. One of these, Robert Schellenberg has been convicted and, since the jailing of Ms Wanzhou, sentenced to death for drug trafficking.

Above: a project of mine that is almost finished. It may just come in handy…

Ever want to just get away from it all? Things just south of where I live seem to be getting a little dodgy. I’m not following it closely – bad for my health – but I get the impression that we (the entire Planet) are in for a frightening amusement park ride, kind of like being on a rickety contraption that has needed maintenance – no, out-and-out modification – for waaayyy too long. Circumstances beyond our control, such as locked iron bars across our laps, forbid escape, yet we might have avoided the crisis by END_OF_DOCUMENT_TOKEN_TO_BE_REPLACED

It increasingly appears that the US, facing eventual economic decline, is desperate to consolidate its One Superpower Forever role, no matter what misery has to be inflicted on the rest of the world to do it.

Trade Deals, such as the TPP, with Investor-State Dispute Settlement Agreements (ISDS agreements) that allow corporations to sue governments, are one aspect of the American hegemony’s struggle. These have been encountering some difficulty in being ratified. And Donald Trump has threatened to tear up NAFTA, a trade agreement that already favours the U.S.A. over Canada. NAFTA’s  ISDS agreement section is Chapter 11. Google that to see that the U.S.A. has never lost one of these dispute settlements.

There are three main military aspects to the ugly struggle to stay on top:

Uncle Sam seems to me to be preparing for all-out war to consolidate its hold on the planet. I shall discuss NATO first.

NATO: First, let me mention an article called NATO Aggression: Is There A Way OUT? by Christopher Black, an international lawyer based in Toronto. Published in the journal New Eastern Outlook, it uses great economy of words to shed new light on the macabre, complicated entirety of the NATO situation, down to the END_OF_DOCUMENT_TOKEN_TO_BE_REPLACED

I am sitting in my living room looking at the photos of my family on the piano and listening to the US election results come in on CBC radio on my iPad. One of my children and one of my grandchildren live in the US.
I have long been critical of the first-past-the-post electoral process and what happened on November 8th in the US reminds me vividly and viscerally how poor and unpredictable that antiquated system is and how farcical what we on both sides of the border call “democracy” has become.

However, my immediate, personal concern is about how vulnerable and scary things in neighbourhoods and on Main Street USA may become for the possibility of random acts of violent hostility caused by primitive emotions produced to no small degree by the shabby rhetoric and vaudeville displayed by both sides in this shameful, cynical contest.

Julian Assange has done courageous service in exposing how those controlling the world’s overwhelming superpower really have nothing but disdain for its average citizen and zero appreciation for those killed or maimed in the unfortunate places that they choose to manipulate. If I were a Syrian, Libyan, Afghan, Honduran, Salvadoran or any or any other tragic victim of decades of American hegemony, I might have been indifferent to this outcome.

But having two vulnerable, much-loved family members across the border…

Things predictably unpredictable are coming too quickly to a head.

The Greeks, the Brexiters and, now, millions of Indian workers have taken to the streets.

Coal mine canaries: some dying, some chirping loudly.

Will they stir us slumbering, Trans-Atlantic couch potatoes into action or will the fat cats prevail?

And from an ever-inspiring source: