Departing Ragusa on Sunday morning our first stop was at the Valle Dei Templi, site of seven temples on a huge 1300 hectare site on a ridge, not in a Valle, near the town of Agrigento.

This dates from c. 450 BC clearly Greek and the columns are Doric, the earliest of the three Greek styles, with simple capitals. Later came Ionic and lastly, Corinthian.

Circa 435 BC, this is claimed to be the best preserved temple in the world.

A rocky, rainy place dedicated to this son of Zeus. 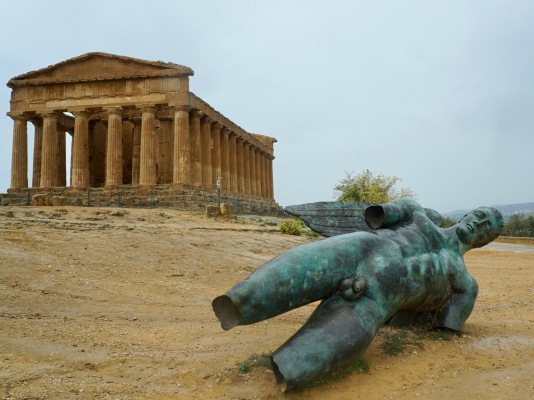 The poor, we were told, lay buried here…

Our first dinner with everybody on the tour was in Palermo Sunday night. I photographed all the tables and sent them to our group after we got back.

After the seeing the Valle we bused to Palermo, where we dined with the whole group at our hotel.

After breakfast on Monday Roberto delivered us safely uphill to another cliffside place – Monreale. Its beautiful Duomo Di Monreale is world famous for its Norman architecture and the fact that is chock full of spectacular mosaics.

We climbed many stairs from the road to reach the square where the Duomo, dedicated in 1182 to the nativity of Mary.

On the way up, Carmen from NJ (I think) paused to view the display.

Our local expert explains this impressive specimen to us groupies

Close up of the exterior shows its Arabo-Normanno style 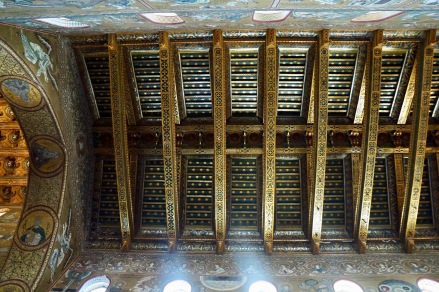 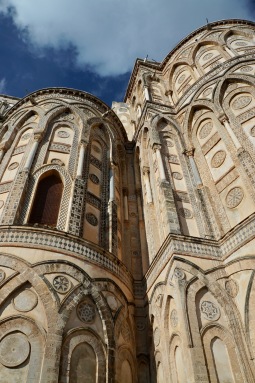 Again the Arabo-Normanno style of the exterior

At the bottom on our climb down was this collection. In Erice, Anita later sprung for a lovely decent-sized marionette for our granddaughter.

Palermo Afternoon – The Cathedral and A Historic Palace

We visited Palermo Cathedral and killed time checking out graffiti until our 12:30 appointment at perhaps the #1 attraction in Palermo: Palazzo Conte Federico. The Count’s family can be traced back to Holy Roman Emperor, Frederick II, one of the truly great figures in history and King of Sicily at four years old in 1198. His descendant loves to race vintage sports cars and the Countess, who guided our group around, is an Austrian swimmer and musician.  She was a fascinating guide, explaining some Sicilian customs and superstitions such as the proper direction for a bed and warned us not to make the upward “corno” sign even by accident. This belief apparently predates Christianity.

Dedicated to the Assumption of Mary, built on the site of an AD 600 church built by Pope Gregory I and then converted in the 9th C. to a mosque after the Saracen conquest.

Worth a huge fortune, I’m sure… There is a nearby tribute to Father Giuseppe Puglisi, killed by the Mafia in 1993 for opposing them.

St. Agatha, born in Palermo or possibly Catania, reportedly lost her breasts when tortured by Saracens. She is now the patron saint of breast cancer. 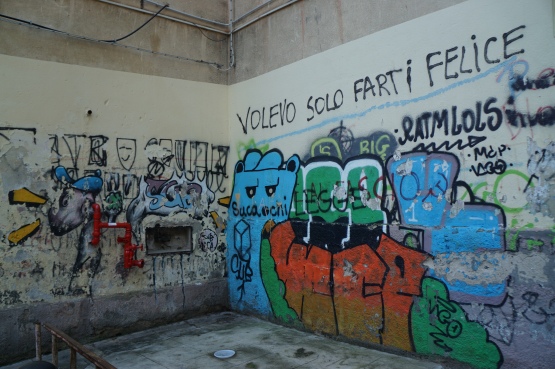 There was not much artistry in this piece but the rude looking slogan was “I only wanted to make you happy.” Awwww…

Easy to walk by this place, but this was a great tour and the treats were a hit as well! 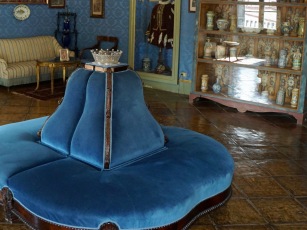 A swimmer, a musician, a teacher… 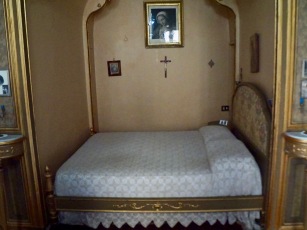 This is the proper direction for the sleeper’s head to point. No doubt the earlier countesses had shorter beds.

Two more nights in Palermo left… Visiting Erice and Trapani on Tuesday and on Wednesday we will have a great visit of Cephalu and proceed to Taormina.