From Robert M. Pirsig’s wonderful 1974 book, the most read book on philosophy ever, this quote on how Aristotle, who had little respect for the great Sophists, started us on our sad path to alienation from the natural world, via the awesome engine of technology:

And the bones of the Sophists long ago turned to dust and what they said turned to dust with them and the dust was buried under the rubble of declining Athens through its fall and Macedonia through its decline and fall. Through the decline and death of ancient Rome and Byzantium and the Ottoman Empire and the modern states – buried so deep and with such ceremoniousness and such unction that only a madman centuries later could discover the clues needed to uncover them, and see with horror what had been done….

Pirsig, born in 1928, is still alive. Listening to this CBC podcast led me, belatedly, to him. His book is about how he challenged the university system on its perverted rationality in a single-minded, fanatical battle that drove him into isolation from his work and family. He was eventually committed to a mental institution where he was subjected to severe electroshock “therapy.” He eventually faked his “reform” in order to be released from the institution and later, in 1968, took a motorcycle trip with his teenage son, Chris, and two of his adult friends. The therapy had destroyed many of his memories. Calling his former, insane, self Phaedrus, he rebuilt Phaedrus’ thinking through these and other fragments: his notes, the memories of former friends and colleagues and his interaction on this trip with his alienated, troubled son, Chris.  He also read and reread philosophers, Greek mythology and history in the rebuilding process. This book is helping me in many ways. It adds new dimension and personal insight into how we got into the dangerous political/technological/moral/philosophical place in which we now, tenuously, live. It offers a process by which we just might get out of it. It helps to clarify, support, grow and even, perhaps, mellow my thinking on human issues and philosophical perspective. It may turn out to be the most important book I have ever read. I don’t think I’m giving too much away in giving you one more, very short, quote:

The real cycle you’re working on is a cycle called yourself.

Below is a concept diagram that I have done that is my way of working on understanding and remembering Pirsig’s book. I have written many more notes. Simply reading something like this book doesn’t work for me.

Last year in Spain on our Camino Santiago my wife and I noticed that many sewer covers in towns along The Way contained motifs that showed the ancient symbol of the Camino: the cockleshell.

This shape of shell is found on the Atlantic coast beyond Santiago de Compostela. Early on in the 1000 year history of this pilgrimage, pilgrims returning home used the cockleshell as proof that they had completed The Way.

Among the blessings one, whether religious or non-theist, experiences are the reflective walk itself, the ancient architecture, the completely unspoiled countryside in some parts, researching the crazy, sacred HISTORY (omg!), the making of new, lasting friendships and, an unnecessary but wonderful bonus for us, spending tons of quality time preparing for the challenge, sharing the walk and sharing the memories – and talking about our next one!

Check out my posts in my Category, Camino Santiago. They vary from brief to very detailed with lots of photos and tips.

OK. Still not about South America yet, but I warned you last time. Anyway – if I hadn’t gone to teach in Trinidad in 1965, I probably wouldn’t have done the two month South America trip in 1967. So kindly bear with me, or, if not, feel free to skip to the end of this post or go elsewhere with my good wishes and abject apologies.

Our West Indies CUSO volunteer contingent (young adults with university degrees or special skills who had selected to serve in the sunny Caribbean over more distant sunny places like Malaysia, India or Tanzania – about two dozen of us in all) assembled at Ottawa’s international airport on a very chilly morning in early September, 1965. We climbed an outside ladder, waved to our loved ones and entered Prime Minister Lester B. Pearson’s Canadair North Star. This was not a jet, but a plane powered by four Rolls-Royce Merlin propeller engines. They were proudly termed “turbo-props,” whatever enhancements that meant. Still slow and noisy compared to modern jet planes. Simpler times. It took us 19 hours of island hopping before our 8-member Trinidad contingent arrived at Piarco Airport in Port of Spain, the North Star’s last stop. END_OF_DOCUMENT_TOKEN_TO_BE_REPLACED

We visited Morocco for 6 days on the guided part of our 2011 holiday in Spain, Portugal and Morocco. Do not shortchange yourself with the one day tour of that amazing, welcoming country.

Rabat is the capital. King Muhammad VI is, like his grandfather Muhammad V was, a much loved and wise ruler. They are part of a dynasty that has reigned since 1631 – the Alaouite Dynasty, founded by Moulay (Saint) Ali Cherif, a descendant of the prophet Muhammad via the prophet’s daughter, Fatima and his cousin, Ali. The Alouites are Sunni Muslims.

Morocco was the first country to recognize the fledgling United States and has had a treaty of friendship with the US that is the longest standing T of F in existence.

Under then “Sultan” Muhammad V, Morocco was an ally during WW II. Sultans reigned in Morocco but at that time it was a colony ruled in bits by France and Spain. Promises of self-rule were made in return for help during the war, but these were not kept. Movements grew here as they did around the world, in support of workers and autonomy. Muhammad V cautiously supported the independence movement. The French rewarded him with exile to Madagascar in 1953. This caused such trouble with the people that he was back within two years. Shortly thereafter Morocco became an independent kingdom, with the popular Sultan now the King.

His son, Hassan II, became king when papa died in 1961. Hassan was not a nice King and more than one attempt was made on his life. Malika Oufkir, daughter of a general implicated in a failed assasination, was imprisoned by Hassan, an ordeal that lasted 20 years and spawned a wonderful book, Stolen Lives, that Anita and I enjoyed reading in our Morocco research before taking the trip. Oufkir and her close family members eventually escaped from their isolated desert prison.

Hassan II died in 1999 and Muhammad VI, his son, replaced him. While some, again cautious, reforms have taken place, Muhammad VI is not without his problems, one of which is an outdated Islamic penal code that resulted in the suicide of a rape victim faced with the decidedly unpleasant ruling forcing her to marry her rapist. 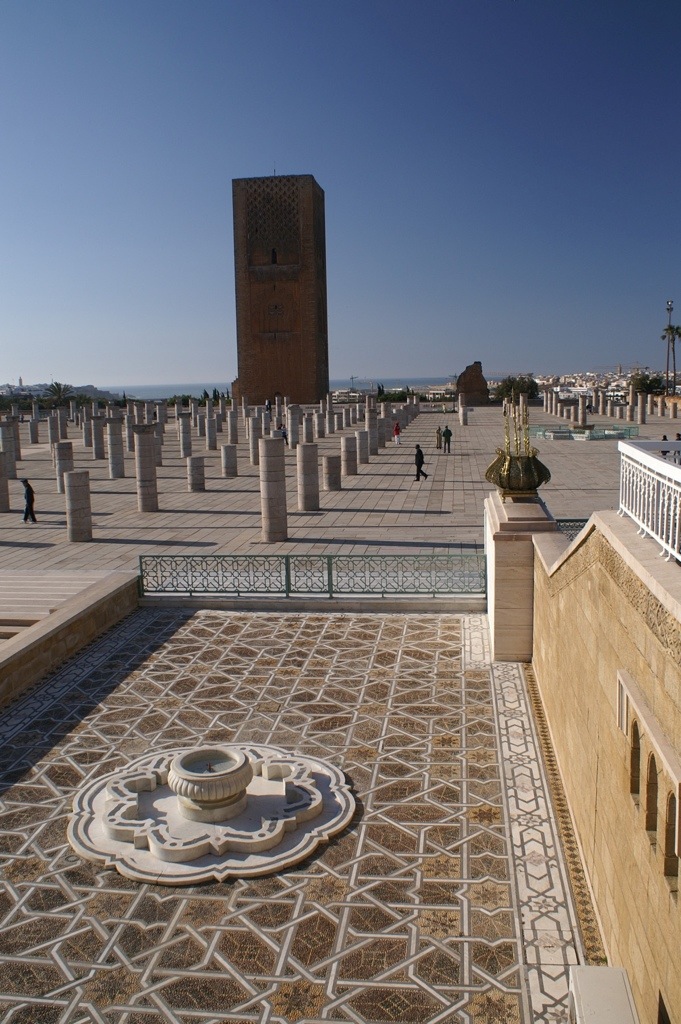 Looking away from Muhammad V’s tomb are the impressive remains of an interrupted (by his death in 1199) attempt by Sultan Yacoub al-Mansour to build a massive mosque (look at those columns!) and the largest, tallest minaret in the world. The red sandstone “Hassan Tower” was inspired by the beautiful Koutoubia mosque in Marrakech, also constructed under the reign of Sultan Yacoub al-Mansour. At the time the strict Almohad Caliphate controlled Morocco, a good chunk of coastal North Africa and southern Spain. By this time the Golden Age of Islamic Andalusia, which spread much culture, including Greek philosophy, throughout Europe had been taken over by this harsh way of interpreting Islam.

The gate was protected by two of these colourful guards. Green is the colour of Islam.

Above: The top of the Koutoubia Mosque in Marrakech.

How does an emperor bury thousands of these full size clay soldiers for two millennia without the huge project being discovered until two farmers dig a well in 1974?

Kill off all the wonderfully skilled workers who ever worked on it so no one can squeal.

It takes a strange, compulsive mindset to be emperor.

Note 1: This blog is republished under a new title from my old site. It is from April, 2010 but bears repeating. The opinions remain mine and the authors’ truths are timeless.

Note 2: Here is a link to a January 9th, 2013 Guardian review of Jared Diamond’s latest book, The World Until Yesterday by none other than Wade Davis. It is quite enlightening. Wade Davis makes the important criticism that there is still a sense in Diamond’s eloquently humane, but anthropologically naive, work that the fundamental paradigm of the superiority of the European worldview is alive and well. Diamond  simply believes that the West can benefit from tweaking derived from insight contributed by an appreciation of the way in which indigenous cultures relate to the unity of all living things on the Earth. Davis, on the other hand, recognizes that the apparently primitive indigenous approaches to understanding and to life are equally valid ways of living and that European  peoples need to recognize this if we are to survive. Only a new appreciation of the complete validity and worth of indigenous worldviews will take us where we hope to go: alive into the next century.

I don’t know exactly when I bought the paperback version of Jared Diamond’s great book, Guns, Germs, and Steel, published in 1997 or 1999 (those Copyright notes are confusing), but it was possibly as early as 2004. I soon got distracted (saw something shiny, maybe) and put it down, probably somewhere around page 100. I finally finished it yesterday, all the way to the end of the 2003 afterward – page 440, after several other shiny objects interfered. My friend, Bill, called me a while back and mentioned being impressed by it, which reminded me that I owned it. I was impressed with the fact that Bill seems to have plowed through it at what seems to me like Mach 2, but why should anything he does surprise me? He seems to be able to do so many things energetically (and well), often with brilliantly funny self-effacement. Anyway, after working my way to page 200, I became obsessively determined to finish it and must have raced through the second half in less than two months!

You might have gathered that it’s not an easy read. The Da Vinci Code it is not! But Diamond is one of three authors concerned with the people and other living things on this Planet that are worth taking out your highlighter (if your memory is as short as mine) and plowing through. END_OF_DOCUMENT_TOKEN_TO_BE_REPLACED

This post is really an eye-catching introduction to an excellent link on the Topsy-like growth of neoliberalism, now a bane of our, possibly short-term, existence.

A history lesson which everyone born after 1970 should read. It is well worth persevering through and reads very simply.

The slide I personally took, in 1967, of this brilliant, iconic piece of masonry disappeared in 1972 when my wife, Anita, and I  moved from England to Canada, where I was born. Eighty choice slides from my two month South America trip somehow didn’t come with us or in our separately-shipped trunks. But that’s another story.

My topic is not about lost slides; it’s about lost ways of thinking, speaking, listening and doing. There is as much, likely more, human creativity, intelligence and “spirituality” in this one stone from the wall of Inca Roca than  in the bloated speeches of today’s politicians and works of some popular writers.