Bleakness abounds. Politicians with considerable power turn away. Mammon rules with asymptotically growing crudity, cruelty and excess, even without Trump in “power.” No big surprise that American “democracy” is a crock if one’s eyes are truly open to HRC’s portrayal by Wikileaks. We have learned nothing from the fascism of the past and, ironically, we minions who have benefitted from neocolonial atrocities committed upon others around the globe for over a century will, in turn, be ground under.

So wrong on so many levels.

And, President-Elect Trump, the idea of Greatness in the old-fashioned, Roman sense of economic growth and world dominance, is meaningless. In a finite biosphere, growth, as we have known it, is unsustainable. Get over it.

It is time for a Damascene Conversion. 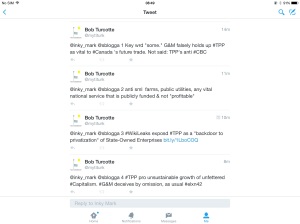 Today is a key day in the negotiations for the Trans Pacific Partnership trade agreement. Japan is going home on Monday. I hope that it does not pass.

This is a quick summary of some stuff I tweeted today in response to a tweet by a concerned @inky_mark that links to a Globe and Mail article about the now or never aspect of this trade deal.

The Globe and Mail falsely holds up #TPP as vital to Canada’s future trade and growth.

What the Globe doesn’t say is that the TPP is anti-CBC, anti small farms, anti Canada Post, anti public utilities and any vital national service that is publicly funded and not “profitable.”

Wikileaks has exposed the TPP as a “backdoor to privatization” of State-Owned Enterprises (SOE’s).

The TPP would be an impregnable legal fortress defending the unsustainable, planet-killing growth of unfettered capitalism. A vehicle for corporations to sue countries for enacting laws that protect the environment or the marginalized if these laws impact the sacred “God-given” rights of multinational corporations (MNC’s).

In their otherwise useful article, the Globe and Mail deceives by omission as usual. It has shed light on some of the details, but has left out the dangerous points I raise above.

Then there is the overall picture:

In essence the TPP, led principally by U.S. corporations, including the beneficiaries of its obscene war machine, is America’s latest attempt to isolate China, Europe and BRICS Nations. It ignores issues of environmental sustainability. By replacing publicly-funded institutions with more expensive private corporations it wages a class war against the middle class and the planet’s poor. It will take us back to poverty, sickness and, ultimately, serfdom.

Finally, I fear, this competition about power and scarcity will take us into a military WWIII.

Decades ago (I’m guessing ca. 1980) an adult family conversation occurred in my parents apartment. My cousin’s husband was very successful, having studied computers and accounting at university before the digital age took off. He traveled the world setting up distribution systems for a major door-to-door cosmetic firm.

He had recently participated in a think-tank session on the future, in which young, forward-looking minds from Canadian industry, government, media and trade unions had been asked to participate. He had a piece of inside information to share:

Industry and government were, way back then, looking at the potential problems that would occur when the typical 40-hour work week shrunk due to information technology and the great unwashed found ourselves with time on our hands and an increased feeling of alienation from the sense that we were contributing to society through work that could be thought of as useful and worthwhile.

Ways must be found to keep the masses occupied and entertained.

END_OF_DOCUMENT_TOKEN_TO_BE_REPLACED

I have not been following the tragic Ottawa shooting closely for various reasons. Mainly in an effort to preserve my equilibrium: Mansbridge and Solomon both have always impressed me as ratings/prestige/salary-driven lackeys of the new CBC TV aimed to keep us at an “elementary school” level of political awareness while, at the same time, thinking we’re clever. I focus on the terrific, enlightened stuff that CBC Radio still is permitted to produce.
The little TV news that I do catch in passing by the family room archway just confirms to the growing, hardening plaque in my attitude-arteries that our “democracy” is a Matrix-styled dream that we are kept in by very clever theatre.
The cynic in me says that Harper will seize this sad “opportunity” to paint the opposition as “lily-livered liberals” on security, build more physical and intellectual prisons, and, just possibly…, call an early election in the hope of scrounging

Oh, and if you think I am tough on Stephen Harper, read this by John McMurtry, author and Professor of Philosophy at the University of Guelph. OMG!

Above: “Stealth attack drone” – a bit of levity before the deluge of gloom…
*********
A couple of quotes from July 2013 articles that point to a divorce between capitalism in the extreme form into which it has morphed and what we used to think of as democracy.

Maybe there’s something wrong with our notion of paradise.

The above quote is from a book called Trouble in Paradise by Slavoj Zizek reviewed in the July 18th London Review of Books.
The second quote is from the same issue of the London Review of Books. This one is called What’s In It For Obama by Stephen Holmes. It discusses the current president’s now widespread and cowardly use of attack drones to kill mere suspects of anti-US activity and any other innocent humans and pets who happen to be nearby.

… has Obama’s switch from a policy of detain and interrogate to a policy of kill on sight really followed an anti-liberal script written by Bush-era hawks? The speculation has a ring of truth. At the very least, Obama’s armed drone programme is a blood relative of Bush’s original unindicted detention programme. Their kinship is suggested by the shared principle that suspected enemy combatants do not deserve hearings to prove they are innocent of the charges against them

I had a lot of sauce to add to these two quotes but I have distilled it into the following few lines. The last quote is mine.
I have called the use of drones cowardly before (here, here, here and here), but this cynical, callous and, yes, evil use goes beyond the pale. Marshall McLuhan saw early that technology changes how we live. It is clear that it has made it possible to make real warfare into a thoughtless and self-serving video game. This is (as if we needed it) ultimate proof that technological progress has outstripped humanity’s moral capacity for using it properly.

Disgust doesn’t even come close to how I feel about how far our species has fallen.

Recent studies have shown that our children score better than we and our grandchildren better still on IQ tests yet the broadcast media are being dumbed down to attract a younger audience.

This begs the question: Are the young really smarter than we geezers? END_OF_DOCUMENT_TOKEN_TO_BE_REPLACED

Whatever the reasoning behind Dalton M’s intention to prorogue the Ontario Legislative Assembly, what he is doing is giving credibility to Harper’s cynical and dishonest double use of this procedure.

The next time Harper uses it, he will be able to point to a Liberal who has used it.

In the long run this is a bad thing for Canada.

Proroguing used in the above ways is a symptom that democracy, as a whole, is seriously flawed. It is in danger of flipping into totalitarianism if the decline gets any worse. One important change that would make proroguing impossible would be to throw out our winner-take-all systems in Canada, Britain and the U.S. and replace them with a carefully-crafted form of…