On June 16, 2016 Maciej Cegłowski, one of four panelists on a seminar called The Moral Economy of Tech, startled his SASE audience of social economists with his ten minute contribution. It is worth taking the few minutes it takes to read. He reveals the scary extent to which our institutions gather a dangerous, gargantuan, indigestible amount of data on virtually every citizen.

Cegłowski calls for a rethink of this invasive activity that governments and corporations do “just because we can” and muses about what could happen if extrajudicial murder by military or police drones were to become as commonplace in the First World as it is in an increasing number of US-strategic, Third World, places. And what place isn’t “strategic” for Barrack and Hillary these days? 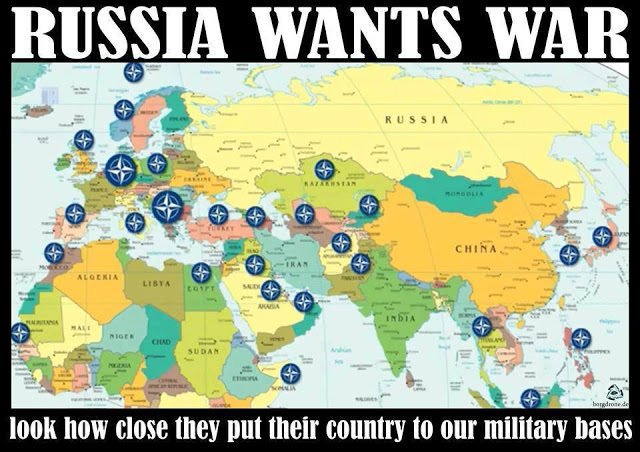 The above courtesy of russia-insider.com

Cegłowski points out that many of these drone hits are simply based on circumstantial data collection from cell phone contact lists or social media interchanges that create some imprecise “probability” that a target, guilty or innocent, is in a house or a car or at a wedding:

Get into the wrong person’s car in Yemen, and you lose your life.

He concludes with this frightening statement about data collected for data’s sake:

What we’ve done as technologists is leave a loaded gun lying around, in the hopes that no one will ever pick it up and use it.

I’m getting tired of passing on this stuff like Jeremiah.

Cannot help thinking that tumors like ISIS are symptoms that have erupted from a much broader illness that has invaded the body of Mother Earth, whose nation-state “organs” are competing with each other for the scarcities: energy (nutrition), and water. That is, methinks, what these wars are really about and the cyclical feedback provided by each organ’s response amplifies the “other” instead of starving it.

Hatred for the actions of the drone-wielding US and the fundamentalist swaggerer Harper must play some part in this sort of horror. Nobel laureate, Malala Yousafzai, who has experienced extreme Taliban misogynistic cruelty, has the balance to see both sides of this sick situation and the courage to speak truth to power. More bombs and beheadings are not going to help in the long run.

Recently it came to me that the 2003 self-sacrifice of Rachel Corrie, killed by an armoured Israeli IDF bulldozer when she stood between it and a Palestinian home in Rafah, Gaza, and the twisted radicalized killers we see now here and in the Middle East are yin/yang symptoms of the same, fundamental, compulsive, societal psychopathy.

Above: “Stealth attack drone” – a bit of levity before the deluge of gloom…
*********
A couple of quotes from July 2013 articles that point to a divorce between capitalism in the extreme form into which it has morphed and what we used to think of as democracy.

Maybe there’s something wrong with our notion of paradise.

The above quote is from a book called Trouble in Paradise by Slavoj Zizek reviewed in the July 18th London Review of Books.
The second quote is from the same issue of the London Review of Books. This one is called What’s In It For Obama by Stephen Holmes. It discusses the current president’s now widespread and cowardly use of attack drones to kill mere suspects of anti-US activity and any other innocent humans and pets who happen to be nearby.

… has Obama’s switch from a policy of detain and interrogate to a policy of kill on sight really followed an anti-liberal script written by Bush-era hawks? The speculation has a ring of truth. At the very least, Obama’s armed drone programme is a blood relative of Bush’s original unindicted detention programme. Their kinship is suggested by the shared principle that suspected enemy combatants do not deserve hearings to prove they are innocent of the charges against them

I had a lot of sauce to add to these two quotes but I have distilled it into the following few lines. The last quote is mine.
I have called the use of drones cowardly before (here, here, here and here), but this cynical, callous and, yes, evil use goes beyond the pale. Marshall McLuhan saw early that technology changes how we live. It is clear that it has made it possible to make real warfare into a thoughtless and self-serving video game. This is (as if we needed it) ultimate proof that technological progress has outstripped humanity’s moral capacity for using it properly.

Disgust doesn’t even come close to how I feel about how far our species has fallen.