This page, started in 2012,  is dedicated to what we see migrating through or just hanging out in in the wooded green belt, whose stream runs SE behind our house.

We can head NW for a couple of miles via two small “lakes” in a nice housing development – the successor of three small, wild quarry pools. The pools ignored happy youngsters jumping off 20′ rocks and, in the 1970’s and 80’s, Our Woods was an important migratory route  for tens of thousands of Monarch butterflies, hummingbirds in the dozens and many species of kinglets, warblers and larger travellers. Now the high rocks are no more and humans, young or old are forbidden to swim. I had the amazing luck to see the trees covered in Monarchs while walking our dog early one morning ca. 1980, five years before we moved here.  That same day the woods were visited by dozens of hummingbirds. 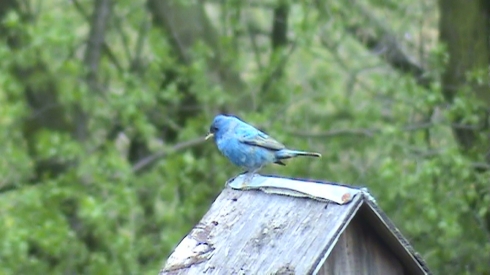 This Indigo Bunting also visited our feeder on May 16, 2011

May 11: A great day walking north on the east side of Lower and Upper Parr Lake! Went out around 7:30 with jackets on. Sunny and cold. Saw a flicker several times and our first 2018 kinglet: a single ruby-crowned. Most have probably come and gone, but this spring is weird. Also our first 2018 Black-throated Blue warbler very close. Other firsts for this year were a gorgeous male Cape May warbler, and a female  Blackburnian warbler. There were lots of Myrtle warblers as usual, male and female. This time we saw a pair of house wrens after seeing our first ever in Brampton on May 9. About 10 Rough-winged swallows were feeding over Upper Parr Lake. Song sparrows mostly on the way back at about 10:30. The highlight of our day was hearing and then seeing a Baltimore oriole twice. First close up and full on. So many times we hear them but fail to see them. Then, near the south end of South Parr we heard one and saw it in flight. Last thing was a Grey Catbird when we were almost home. It fluffed up its feathers for us, something we hadn’t seen before. The humming bird feeder has been out since May 2 but no visitors seen yet. No worries, the earliest we’ve ever seen them was May 10.

May 9: Three smallish but vocal ravens in a spruce tree N. of École Ste-Jeanne-d’Arc, a solitary cormorant and our second ever House wren! The only other time was in Point Pelée on May 6, 1995.

May 2: This spring has been long in coming. In our first walk in Our Woods we saw red-winged blackbirds, chipping sparrows, robins, downy woodpeckers and a blue jay. There was one Cormorant on Lower Parr Lake and about a dozen on Upper P. L.

March 11: Red-Bellied Woodpecker in back yard maple. Never before seen by us! 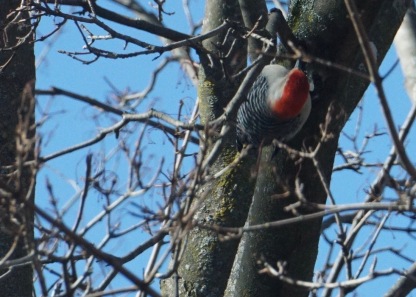 Robins are back in “Our Woods.” Anita saw them first on Saturday, February 18th! That is our earliest ever recorded sighting.

After a winter of the usual at our lucky sunflower seed feeder: juncos, cardinals, downys and hairys, house finches, goldfinches, nuthatches (both rose- and white-breasted), the odd blue jay… we get to April, when the migration begins through Our Woods.

April 27: Yesterday the weather was rainy, so we were treated today to a lot of migrating birds just resting and feeding in our back yard this morning.

The white-crowned and white-throated sparrows were a treat – first for the year – and a lingering hermit thrush on our back lawn was an unexpected bonus.

We went for a birding walk at noon and saw belted Kingfishers on Upper Parr lake (male and female). They are a rare treat. Plenty of myrtle warblers still and one ruby-crowned kinglet. The pair of rough-winged swallows was still feeding on bugs in the air above Lower Parr Lake. A solitary cormorant.

April 24: More excitement: we saw a Green Heron on Northern Parr “Lake” today – like the Night Heron below, this is a first ever sighting for us in Our Woods. We also saw two rough-winged swallows feeding above the water, the first swallows for 2016. About 8 to 10 cormorants still hanging around. One ruby-crowned kinglet. As usual, lots of Canada Geese and Mallards.

April 22: The excitement this year, so far, has been our first ever sighting of a Black-Capped Night Heron at the North end of Lower Parr Lake. It has been there for a few days now. I shot this today with my old Maxxum 5D DSLR camera and Sigma 300 mm zoom, 1/640 s at F 6.3, ISO 100, after a very patient wait. It sat still in a willow for us the first time we saw it – without my camera… The stocky night-heron is the most widespread heron on the Planet, apparently. A fellow walker said he has seen it before, a couple of years ago, while walking his dogs. We were looking for turtles sunning themselves – successful.

April 14 – 22: My first 2016 sighting this year of a ruby-crowned kinglet. I did not have my “spotter” with me and had to try very hard to find one. Since then we’ve seen lots of both types in “Our Woods” and the common brown creeper, a pine warbler, song sparrows. Anita saw a hermit thrush on the 19th – very elusive here – it was quiet but the reddish tail gave it away.

April 12 – A male and two female redwing blackbirds quarrelling at our feeder with a cowbird.

April-May: cormorants seen and photographed, for our first time, in the Parr “Lakes” in “Our Woods.” 55 of them were seen in April and two still there in later May after we returned from a trip to Europe.

April: Kinglets pass through every year, this post has shots of ruby-crowned and a slightly offended male mallard… plus a few other common denizens of “Our Woods.”

April: Myrtle warbler – we see a lot of these passing through “our Woods” in April and May.

April: Brown Creeper – lots of these every year. A surprisingly handsome bird up close.

February 4:  Sad but somehow peaceful. The tail feathers must have moved in the wind, adding a ghostly effect to the image.

This year we’re not away traveling so we’ve been walking through the migratory route behind our Greater Toronto Area house with a pair of light, 8X Nikon binoculars and, occasionally, the Peterson guide every day observing the birds and butterflies going through. Decades ago I walked our dog in the same place early one morning and the trees were covered in Monarch butterflies. Never saw that amazing sight again, but still like to watch the birds go through every spring. Thought I would post a list of what we see this year. Newest at the top. I’ll update this post as we spot new ones.

May 20: First for 2012: Hummingbird in the back yard. Time to put the 1:3 sugar/water in the feeder. Past time, I guess. Planted our annuals Fri and yesterday (Sat.). For the past couple of years they’ve stayed all summer.

May 18: Firsts for 2012: Blackpoll warbler; poss. female scarlet tanager? The females are sometimes tricky to identify. The swallows were swooping and the plover’s were piping. Still hoping, but not too hard, to see the return of last year’s indigo bunting.

May 17:  Female catbirds (they didn’t show the male’s characteristic black cap, a fact not noted in our Peterson’s guide or in our Birds of Canada coffee table book. Saw a redstart and the familiar swallows.

May 10: Two Firsts for 2012: American redstart; male black-throated blue (several singing in the forest) saw one btb early, then one on our way back. The grosbeaks are gone. They didn’t overstay their welcome this year, but that’s two years in a row that they visited our feeder! Serendipity.

May 7: First for 2012: Female grosbeak at our feeder. Solitary palm and many myrtle warblers. B-t green also. The pair of rough-winged sparrows is back. Watched a robin snatch a red admiral butterfly in flight. Several cedar waxwings. Solitary r-c kinglet.

May 5: A feast of feathered friends! Migration gets serious the first week in May this year. Firsts for 2012: chestnut sided warblers (several), palm warblers (2), least flycatcher, piping plover. Others:  lots of yellow-rumped warblers, b&w warbler, red-eyed vireo, blue jays in chorus, plenty of white-crowned and white-throated sparrows, another pair of mallards w 4 ducklings (pair with 10 still has lots), geese with 1 gosling.

May 4: Firsts for 2012: Nashville warbler. Warblers also seen: black and white, b-t green. Others: plenty of white-crowned sparrows. Bonus: two turtles with at least one young-un.

May 3: Firsts for 2012: Yellow warbler (male), magnolia warbler, white-crowned sparrows all seen clearly. Sapsuckers not seen for 3 days now – guess they’ve moved on. Pair of mallards with 10 newly hatched ducklings. Pair of geese with only one gosling – have the May 1 pair lost three babies to predators?

Apr 20: White-throated sparrow first seen (they’d been heard for a couple of days), least bittern being chased from a small “lake” in a development north of our place

Apr 18: Wood thrush, shared an intimate moment with the same killdeer from Apr 17

One thought on “Birds ‘n Stuff”