Our Camino Santiago began on April 25, 2013 in St.-Jean-Pied-de-Port, French Pyrenees. The weather April 25 was beautiful. Perfect for hiking, meditating and snapping photos. We spent the  night of April 25 in the “honeymoon suite,” a tiny but private room at the Refugio Orisson, eight kilometres from, and about 800 meters higher than, our starting place in St.-Jean. Note: we did not ask for, or even have a clue about, the “suite,” the boss at reception just gave it to us.

April 26 was a mystical, but scary, experience. We set off very early and were careful to follow the well-marked trail with its yellow arrows. A mistake could have caused a sad mishap. Anita had sent her pack ahead to Roncesvalles’ public refugio; a wise decision that turned out to be…

Photos 3 and 4 in the set below show just the start of our walk from the Refugio Orisson across the mountains into Spain, where we had a night booked at the Hotel Roncesvalles. It was cold and very wet – a fine, persistent rain that did not let up. I put my Sony NEX-5N DSLR camera away after shooting the beautiful horses. It was already damp just from condensation when I removed it to shoot. Terrible visibility caused us to miss the Statue of the Virgin, a landmark that overlooks the valley no more than 30 metres from the trail, even though I knew when we were passing it! 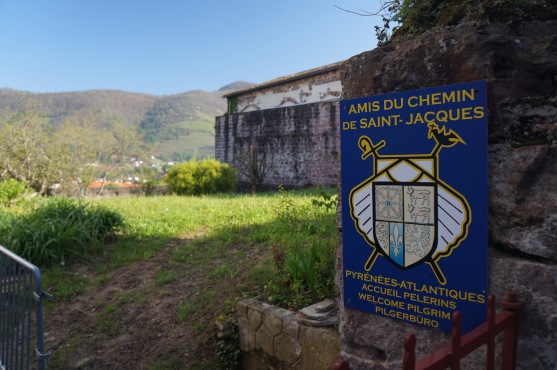 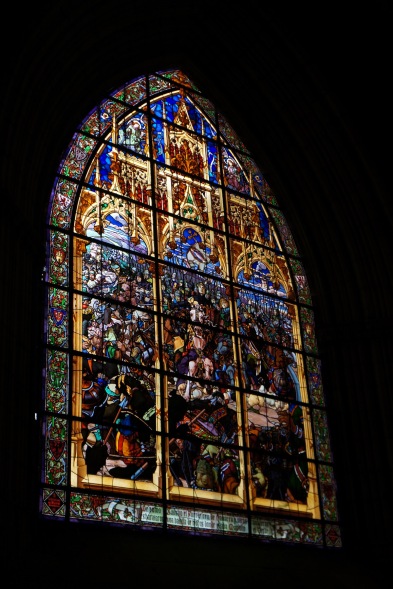 The border with Spain was simply marked on a small sign. You must trust me; my camera stayed in a ziplock bag in my rain jacket pocket.

After more walking we passed the water pipe, named after Roland, an 8th Century French soldier who was Charlemagne’s senior officer. I reflected on the incredible history connected to the Camino. and we filled our bottles with pure spring water.

It had begun to snow as we approached the highest elevation on the trail from St.-Jean to Roncesvalles – just under 1500 metres. We ate our small lunches in a sheltered area where pilgrims were resting, wringing out wet clothes and exchanging information about the shorter, steep decent vs the safer descent into Roncesvalles. The way was so snowy and slippery that we ended up taking the steep, 5 km descent by mistake. The snow had changed to freezing rain. The trail descended now through a steep, wooded path with muddy and slippery parts over rock. I was worried that we would be in serious trouble if one of us slipped and fell. Though we were slow, no one had passed us in a while. We might have been the last two pilgrims on the trail…

Sodden and tired, but happy to have made it, we trudged down into the venerable Navarre city of Roncesvalles. We slogged  into the refugio to pick up Anita’s pack and reluctantly declined a warm invitation to hang around later with pilgrims we had met at the Refugio Orisson the evening before.

We found our Hotel Roncesvalles, took off our muddy boots, rain pants and jackets, and washed them in the huge, tiled shower anteroom. Never was a hot shower more appreciated than that evening! The room had hot water radiators, perfect for drying our stuff. We ate our Pilgrim Meal in our hotel’s dining room. Before dinner I walked across a small, snowy square and borrowed rice from the kitchen at Casa Sabina, a restaurant associated with our hotel, and placed the rice in a ziplock bag with my camera. I didn’t turn the camera on until the next morning, when I nervously shot, from our hotel room window, snowy photo number 5 above. It worked!

We visited several historic attractions in Roncesvalles and had lunch at Casa Sabina, where I had got my camera-saving rice grains the night before.

Then we took a taxi to Pamplona :-Q

Our Camino was a hybrid of walking many, but not all, stages (for health reasons) but also involved travelling by public bus or, very rarely, taxi. We bunked in a variety of public and private refugios, but also stayed in pensións and even at the Parador in León! We walked all the way across Galicia, from Sárria to Santiago de Compostela, thus earning our Latin Compostelas. You can read about everything we did and find a considerable number of travel, transportation and accommodation tips (and many more photos) at this earlier, detailed post of our own Way of Saint James.

Travelbug Minstrel: Strum for my supper, croon for my cuppa Search for a sign, write for my whine View all posts by mytiturk